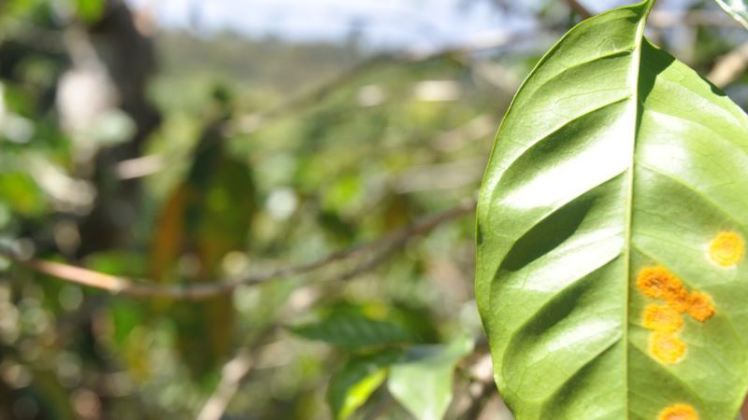 In the last five years, Coffee leaf rust, or “la roya” in Spanish, has crippled Guatemala and Central America.

During the last outbreak, the Committee On Sustainability Assessment (COSA), a Partner in GFAR, was in the Verapaz and Oriente regions of Guatemala for an evaluation of a project aiming to improve the sustainability of Guatemalan smallholder farmers’ livelihoods by building their technical and organizational capacities. COSA collected farm level data from the 2011/2012 and 2014/2015 coffee season (before and after the project). At the early stages of this intervention, there was a widespread attack of coffee leaf rust. The infection severely damaged Guatemalan coffee production.  By the end of 2012, the Guatemalan National Association of Coffee (ANACAFE) estimated that approximately 70% of the total coffee area in Guatemala was affected by the rust outbreak. In 2015, 97% of surveyed farmers reported that their coffee plants were attacked by the leaf rust, with approximately 67% of plants affected and 11% of plants dead. Farmers declared that the leaf rust crisis was the worse they could remember, and that it caused the greatest destruction of their coffee cultivations.  According to our data, we were able to estimate a consequent decline in coffee farmers’ income of approximately 46% on average, with yields dropping 41% between the two years.

While this all seems like damning news for the Guatemalan coffee farmers and industry, the truth is that some Guatemalan farmers were better-positioned to respond to an outbreak of coffee leaf rust. Crucial in their fight against crop and income losses were their resilience levels, expressed as their capacity to absorb, adapt and transform in the face of the shock. More resilient smallholder farmers, indeed, saw substantially lower losses in their coffee production and incomes, damming what could have otherwise been an even more severe shock. The pertinent question emerging from this scenario is: who are these farmers and what factors contribute the most to their resilience?

The Guatemalan experience suggests that the implementation of coping strategies and the presence of safety nets, in combination with preparedness strategies, such as the use of pruning and shade management, fertilization and integrated pest management practices, contributed to building robust response capabilities in the short term. Absorptive capacity results reinforced when mitigation and preparedness strategies work together.

But being resilient is a much broader challenge than only absorbing a shock. Indeed, reducing the vulnerability of farmers to leaf rust implies an overarching adaptation effort both at the individual and community/ regional levels (e.g., service provision and infrastructure development). In other words, preparedness and mitigation should be considered with the other two crucial resilience capacities: the intrinsic ability to adapt to changing conditions, and the presence of a surrounding environment that enables conditions for resilience and transformation. In the Guatemala case, the ability to adapt came down most to a few key factors like food security, education, and access to information; whereas the ground for transformation was determined primarily by the access to water (a proxy for infrastructure) and participation in producer organizations (a proxy for participation in civil society).

If all three capacities (i.e., absorb, adapt and transform) are present, as in the case of farmers living in Guatemalan Oriente region, the pathway towards recovery after a shock is greatly enhanced.

This blog post was written by Elena Serfilippi, Coordinator for Resilience Research, and Carlos de los Rios, Regional Research Coordinator for Latin America, for the Committee on Sustainability Assessment (COSA), a consortium of institutions fostering effective ways to measure and understand sustainability in the agri-food sector. During our Partner Spotlight from 23-27 October 2017, we’ll be examining pragmatic ways COSA metrics are driving innovations and sustainability practices, through the applications of tools ranging from impact assessments to performance monitoring. As part of the Partner Spotlight, a webinar on “Effective Tools for Understanding, Managing and Accelerating Impact” will be held on Thursday October 26th at 15:00 Rome time (13:00 GMT).

Metrics is a very relevant area of inquiry for the Partners in GFAR, who are embarking on a Collective Action to develop an “Innovative Approach to New SDG Metrics for Agri-food Innovation.”

GFAR Secretariat is turning the spotlight on the work and Collective Actions of Partners in GFARwho share in our mission to strengthen and transform agri-food research and innovation systems globally. Not a GFAR partner yet? Join now!