Radio is a great tool for reaching people that other communication methods often cannot. It’s cheap, portable, shareable, and easy to understand. It doesn’t require sophisticated literacy skills. Good radio is also captivating and fun. Paired with a mobile phone, radio allows an opportunity for conversation, so that anyone listening to the radio can have a say in what they get to hear.

Conversation is a critically important part of development, and too often it doesn’t happen. If it does happen, one large and important group is often left out of the conversation: women.  Women must be given a role in their development and an opportunity to speak up and access platforms for discussion – such as radio. Without this, it’s impossible to understand their needs, let alone provide for them.

Approximately 70 per cent of African farming work is done by women. Yet resources and services are almost exclusively directed to male farmers. Women face countless obstacles when it comes to farming and agriculture.

“Women are not allowed to have males’ phone numbers, even the number for extension officers [agricultural advisers] and the village leaders. We cannot even invite male extension officers to our farms when we need them. If you do so, then expect major problems with your husband,” said a female farmer from the town of Kiranjeranje, Tanzania.

Women often face many barriers to accessing radio and cell phones – maybe the husband is listening to sport, or the women cannot afford batteries. This means that valuable information provided through radio broadcasts might not be available to them, let alone discussion and feedback opportunities provided through phone or text-in radio programs. 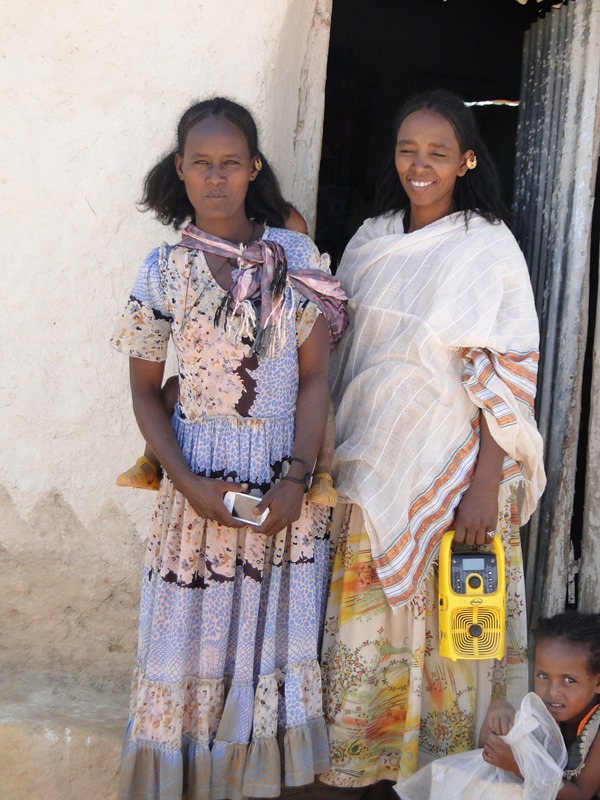 Farm Radio International is working to increase women’s ability to access and contribute to information and discussion about agriculture and rural development through our Her Voice on Air approach, which provides radio sets, cell phones, and training to women’s groups.

With access to phones and a radio as a group, women can choose to tune in to farmer programs. Training and capacity building is also important so that women understand how to use these technologies and have the confidence to participate in discussions – including those taking place on air.

In May 2017 the people of the Tigray Region of Ethiopia were struggling through one of its worst droughts in decades. Thankfully, the Mearenet women’s listening group were able to listen to programs on water harvesting, aired on the radio, and learn valuable information that’s helping them deal with the lack of rain.

Of course, this didn’t happen by fluke. As part of Her Voice on Air, the Mearenet women’s radio listening group were given a smartphone so that they could participate in radio broadcasts. Two of the most tech-savvy women in the group were trained on how to use the phone and how to send messages. The group discussed the radio broadcast and recorded messages to be sent to the station and played on the radio. This means that women who previously had very little voice, now get to hear theirs broadcast across the region on radio.

These women developed confidence, gained respect from their communities, and felt a sense of empowerment, through being able to take charge of their own well-being and development. Struggling with a lack of water, they were able to inform their radio station of what they needed to know. They then enjoyed listening and learning through programs tailored specifically to their needs.

Her Voice on Air was conducted in Ethiopia, Uganda, Tanzania and Malawi, and was supported by IFAD. Read more : https://www.ifad.org/web/latest/story/asset/40215656

This blog post, by Steph Stroud, is part of our Partner Spotlight on Farm Radio International (FRI). Partners in GFAR like FRI are aware that rural communities often have little say in their own future and in directing support to create the innovations to get there. Yet farmers and social groups are experimenters, producers of knowledge and researchers in their own right, hence they need to be empowered to drive innovation processes. FRI has used radio for three decades as a tool for bringing information to people that other communication methods often cannot. Paired with other technologies, radio also allows an opportunity for two-way conversation, so that development practitioners can hear farmers’ knowledge, insights and concerns, and respond accordingly to them.

Multistakeholder actions that empower farmers to voice their own needs and know-how to drive innovation and improve their livelihoods, are part of GFAR’s Key Focus Area Empowering Farmers at the Center of Innovation.

GFAR Secretariat is turning the spotlight on the work and Collective Actions of Partners in GFAR who share in our mission to strengthen and transform agri-food research and innovation systems globally. Not a GFAR partner yet? Join now!