A few days back I visited Manali, a famous tourist destination in northern India. Unlike most of the visitors, my trip was not for fun but research survey work. During one of the conversations with my colleagues, I heard about a farmer named Peter, who is based in Manali. As the name sounded unfamiliar – not a local name of the Manali inhabitants – I enquired a bit more about the farmer. I came to know the Peter is a Swiss man who rears local hill cattle to make a living. The mountain cattle to make a living! Sounded interesting. I decided to pay him a visit.

The farmer who does not rear the breed in Vogue

For the past four-five decades, the Indian State of Himachal Pradesh has adopted and followed the policy of crossing local native cattle with exotic jersey breed. Local hill cattle are of short stature, have no well-established breed features, produce less milk (1-2 liters per day), have poor reproductive efficiency i.e. they come into the stage of reproduction and production at a much later age, and produce fewer calves in their lifespan. So they have been considered uneconomical by researchers and development stakeholders. In comparison, the crossbred cattle have been considered much more productive and, therefore, profitable. The crossbreeding of cattle has made reasonable success in the state. As a result, the majority of the farmers prefer to keep crossbred cattle, instead of local cattle.

Contrary to the Jersey crossbred in vogue, Peter has been rearing local hill cattle for the last twenty-five years. In the words of Peter “I brought my first cow on my shoulders in 1992 from Malana, a village on the opposite side of the mountain ranges of Manali”. He has been able to make a living by using his skill of converting milk to the high-quality cheese. The cheese comes with a unique selling proposition: it is made from the milk of hill cattle fed on pastures. As a result, the farmer has been able to successfully establish marketing linkages to far-off cities of India such as Delhi and Mumbai.Thus, by nurturing a local breed in the traditional fashion, the development of an innovative value chain was sparked. 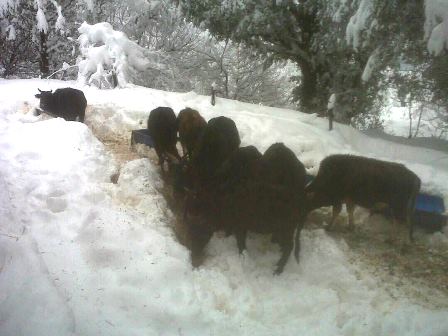 Unfortunately, the skill and wisdom of farmers have received little attention and support from the stakeholders. The policy makers and development practitioners view that his farm needs to be upgraded with superior indigenous cattle such as Sahiwal or Red Sindhi. These breeds are native breeds of neighboring states such as Punjab and Haryana. Referring to such suggestions, the farmer is of the opinion that such breed can only be stall fed as they are not adapted to the chilling temperatures and grazing on the pastures around Manali. Moreover, managing the local cows is easier, too. These hilly cows require fewer inputs, and are more disease resistant. The intelligent cattle can graze the steep, slopy pastures around Manali. Also, through improved management, Peter has been able to receive 5-6 liters of milk and some of his cows have calved once a year, which is comparable to the superior crossbred cows.

The state government has given an impetus on organic farming. It’s common knowledge that the region has comparatively limited use of agrochemicals and rich traditional knowledge and biodiversity. According to standards of organic farming, local hill cattle, which are well adapted to natural conditions, should be the first choice for undertaking organic livestock farming in the state. The present cattle breeding policy of the state also recommends it. Yet the state has yet to make any major headway in organic livestock farming.

Travelling across the state, interacting with farmers and stakeholders, I have received one common question regarding the improved dairy production efforts in the state: “Where do I sell milk? The selling avenues are limited”. Perhaps we can learn more from Peter, who has successfully demonstrated that it is possible to produce milk as well as create a value chain out of the native cows that has no repute in the state. The formal agricultural research and development organisations often fail to recognize this natural inclination of farmers for experimentation. The participation of farmers in research and value chains is imperative in order to facilitate innovations as instruments of social change. Networks favoring multi-stakeholder dialogues, such as GFAR, would give farmers like Peter a voice in informing policymakers about integrating local wisdom into formal the agricultural innovation system.

9 thoughts on “When local knowledge brings innovation: A cattle farmer with a different approach”