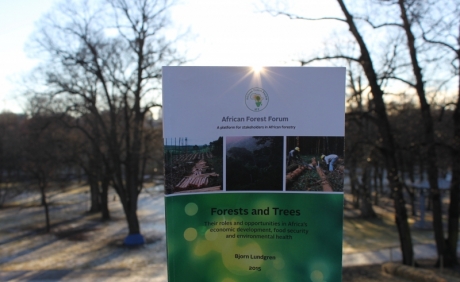 The UN Sustainable Development Goals (SDGs) highlight 17 important issues that humanity needs to address in order to improve the lives of millions. Trees have a role to play in many development issues, and are closely linked to the SDG #15 “Life on land”. Apart from being a major mechanism for climate mitigation, forestry is also an important economic segment in many industrial countries, including Sweden, supporting thousands of jobs.

In his recently published book “Forests and Trees – Their roles and opportunities in Africa’s economic development, food security and environmental health” Björn Lundgren gives tips and examples on how trees can contribute to development in low-income countries, and how sustainable forestry and tree management can help to better manage the growing need for food security and sustainable agriculture.

Björn Lundgren holds a PhD in Forest Ecology and Soils and is an expert on forest policy and institutional capacity building in Africa. He  currently is a member of the Steering Committee of the Think Tank for International Forestry Issues (SIFI). He also worked for the Royal Swedish Academy of Agriculture and Forestry (KSLA), the World Agroforestry Center (ICRAF) and the International Foundation for Science (IFS).

In my interview with Björn Lundgren, he told me that the original idea for the book came about 10 years ago when concerns were raised about negligible attention to forest and trees in the Comprehensive Africa Agriculture Development Programme (CAADP) and the inclusion of NGO’s and scientists was needed to evaluate the results. So, last year Lundgren was asked to write the book, which was seen as a good way to summarize the experience and the ideas.

23 % of Africa’s land is covered by forests and 13 % is covered by “other wooded land” such as wooded savannahs and thickets. “Trees outside forests” also cover a great area, but these are hard to estimate. Every year in Africa, 72 million m3 of wood is removed and used as industrial timber; this is approximately the same amount as annually harvested in Sweden, and Swedish forest industry is the second largest in the world after Canada.

Charcoal and fuel wood are important energy sources in many African countries and half a million people are employed in the formal primary wood production and wood industry sector. However, most of the production happens in the informal economy, which employs around three times as many people. Making the informal sector legal could contribute to poverty reduction and economic growth, since it supports millions with income and materials. A large shadow forestry sector means that massive amount of potential tax money seeps through the fingers of many African countries. In addition, illegal trade feeds terrorist organizations and sustains corruption.

Deforestation in Africa is a threat to the forest reserves, but Lundgren underscores that it’s important to understand the reasons. These reasons are often compelling and have to do with livelihood issues like cattle farming or practicalities like the gathering of fuelwood and building material from the forest. People also get money from producing and selling timber and Non-Timber Forest Products (NWFP’s), like fruits, nuts, leaves and handicraft made from wood.

Lundgren argues that the only way to reduce deforestation and forest degradation is to heavily increase food production on existing farmlands and to develop economically viable and attractive sustainable forest management and conservation practices. This strategy, according to him, has been proved to be effective during the last 100-150 years when different countries stopped deforestation and even increased their forest resources. Increasingly common tree cultivation by farmers and communities which led to tree growers associations and cooperatives is also a positive trend.

Forests are not just for climate

The relation between climate change and forests is significant, but focusing only on climate change, according to Lundgren, diverts attention from more immediate, but equally important needs, like forest conservation for protection of biodiversity and enhancement or restoration of water dynamics.

-There has been excessive focus on forests and trees in relation to climate change, we must also see forests and trees in relation to other important needs, such as food security for instance, or we risk missing many important aspects. Sustainable forestry provides indirect solutions to other issues. The economy will have to guide the forestry and that will include solving climate related problems.

Climate change is something that affects us all, putting forward a lot of challenges. On a positive note, these challenges also bring advantages in the form of increased funding available for climate related projects. One of such initiatives is REDD+, which stands for countries’ efforts to reduce emissions from deforestation and forest degradation and provides financial incentives for preservation of forests, with a long-term focus. Lundgren is critical to how it has been handled so far.

-The issue with REDD+ is that it mainly focuses on the climate change related issues. This is only a small economic incentive for the local farmers. If they grow, say 10-15 trees, they get a few dollars. This is not enough to initiate re-planting on a large scale. However, the developers of REDD+ are now realizing that they must include economic gains in the projects and focus more on the short and medium-term aspects.

Trees are not just for wood

Trade with wood and NWFP’s is a big market and provides farmers with additional income, contributing to food security. A good example of this is informal production of scaffolding poles made from eucalyptus, which Lundgren estimates to be a multi-million dollars business. Fruits, nuts and leaves play an important role in food security and nutrition, but are not usually improved genetically or domesticated and developed to the full potential – something that Lundgren believes would raise production levels.

In the book, Lundgren recommends bringing together knowledge from universities, governments and research institutes to analyze economic and environmental values of forests and trees and their importance for food security and also collaborate with partners outside of Africa, on terms made by the African partners. A successful example that Lundgren gives, is the collaboration between the AFF and KSLA.

One more issue concerning African forestry that needs urgent addressing is the lack of forest schools and staff responsible for forest management. Lundgren stresses the necessity of making the training more appealing to students. This could be done by making graduates from forestry schools more attractive to the private sector through focusing on entrepreneurial and business skills in the curricula.

Although forests are explicitly mentioned only in the SDG #15, Lundgren argues that forests play a role in every single one of them, directly or indirectly. This makes the investment in trees and forests a priority for achieving the SDGs.

This blog post, originally published at siani.se, is part of our Partner Spotlight this week on SIANI.

Other blog posts being featured this week that explore the links between food and forests:

In a bind: How policy divide between forestry and farming can result in poverty and hunger

Are women better at taking care of forests than men?

What do forests have to do with food security? A glance at this year’s HLPE Report

GFAR Secretariat is turning the spotlight on the work and collective actions of Partners in GFAR who share in our mission to strengthen and transform agri-food research and innovation systems globally. Not a GFAR partner yet? Join now!

One thought on “Growing money on trees in Africa, a conversation with Björn Lundgren”