Busy, busy, busy…This quarter has been huge for our young agripreneurs in the GFAR-YPARD Young Agripreneur Project. It’s now 10 months on since they thrilled the audiences at GCARD3 with their enthusiasm, drive and energy in describing their projects. These have all started with the young agripreneurs matched with mentors, engaged in coaching and training, and utilizing their seed funding aligned with their business plans. There have been the inevitable ups and downs – all part of being a young agripreneur and it’s great to see that they are all on track and embracing the challenges and opportunities that the YAP project has offered.

Nikki Chaudhary shares the latest exciting news on her project related to evaluating the suitability of the climate-resilient Gir breed cattle for dairy farming in India.

Oh!!! Its been exactly one year since the blogpost written by me on need of developing climate resilient Indian Cattle was published by GFAR.

That was just not a blogpost but an account of my five years of experience with Indian dairy farming, getting to the core of why it has seized to be a viable means of livelihood for thousands of small farmers.

My project is to develop climate resilient dairy cows that can produce large quantities of milk and at the same time withstand hot and humid climate of our country. In order to do so, we need to have appropriate cross of Indian cows such as Gir which have climate and disease resilient qualities and exotic such as HF which have higher milk yielding capabilities. Brazil, another tropical country, has successfully developed a cross from our Indian Gir. My funder connected me to key people there, as well as to organisations involved in dairy production. Through them I got to know the breeding programme they are using to achieve the most suitable cross. This is done by appropriate cross-breeding of GIR and Holstein-Friesian cattle leading to creation of (3/8 GIR + 5/8HF). Brazil is a very interesting case study of such controlled cross-breeding, since GIROLANDO (GIR + HF) cows now contribute more than 80 percent of Brazil’s milk.

In October 2016, the indigenous cows Gir and Buffaloes Jafrabadi arrived safely to our farm in Village Tanda Vijaisi after a long travel of two days from a very distant state, Gujarat. That, however, was not the end of my project, only a mere beginning of an entrepreneurial journey that aims to ensure that work continues not only in an economically sustainable way, but in a manner that addresses the core social problem that I described in the mentioned blogpost.

The Gir and Jaffrabadi heifers, purchased to develop climate resilient superior breeds, are growing quickly, both in terms of height and weight gain. The heifers are soon going to be ready for breeding.

There will be a development of pure Gir line from the existing Gir herd we have at our farm, and about ten to fifteen HF heifers will be bred with semen of elite Gir Bulls to develop appropriate cross Girolando. The elite semen is important, as is having genetically pure Gir cows. In India we have few Gir bulls, but since in Brazil farmers have been working on Gir development for several decades, they have been able to develop superior Gir. Hence I always aimed to have semen of Gir bulls from Brazil and I was lucky to receive further funding to buy the semen of Brazilian bulls. At present I am working on getting import permission from State and Central Government to actually import the semen!

Many farmers have visited us to see the indigenous dairy breeds and I have had lots of discussions with them on the topic. Farmers are taking interest in the project and that is a positive beginning of increased know-how on having appropriate dairy breeds in our region. While a lot of rampant cross-breeding has been done in India, the unscientific nature of this breeding has often led to farmers to adopt 100 percent HF bulls for artificial insemination. But as HF blood increases, climate resilience diminishes, leading to and unviable and unsustainable dairy sector. I am getting lot of queries from dairy farmers and individuals interested in starting up  dairy production using Gir ,Girolando and Jaffrabadi. Though the project is still in a start-up phase and I have yet to explore the full potential of the breed, I am very impressed by the indigenous cattle and buffaloes and their climate resilience capabilities. 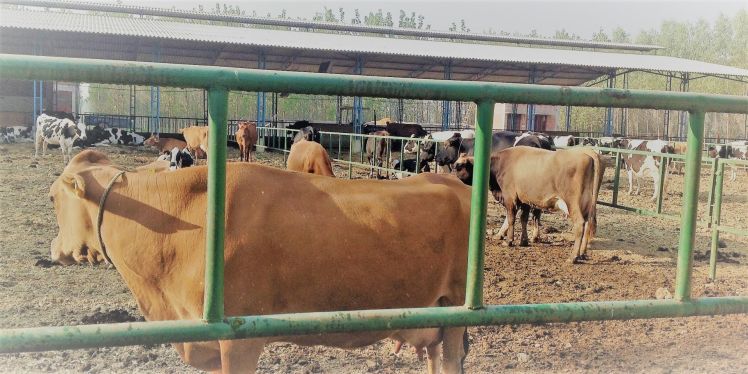 Given the fact that all us YAP’ers  are operating in the agricultural sector, some of the most important challenges are common to all of us. They include lack of favorable environment or policies at Government level, poor market prices, and undeveloped infrastructure in rural areas.  Being able to maintain positivity and optimism when constantly facing these hurdles, is sometimes very tough. There were many times when I asked myself whether my efforts will ever contribute to anything positive, for many reasons. The problems faced in Indian dairy production have largely been accepted by society as permanent; farmers are not aware how the implementation of wrong policies have taken away their livelihoods; any kind of effort to find solution are looked upon with doubt because of the poor confidence people have in the agricultural sector. In addition, importantly, all these efforts also do not generate much income, in fact they often produce negative economic returns for a prolonged period of time.

This, however, is where individuals and organisations who have a solid understanding of these type of struggles and that make a significant effort to encourage me, have played a key role. I have been lucky to enjoy strong support from my family, mentors, a few government officials and undoubtedly the GFAR and YPARD teams.

Being selected as one of the six agripreneurs in the YAP, receiving the seed fund award, and enjoying exceptional guidance and mentoring from the GFAR and YPARD teams, not to forget the love of YAP colleagues, not only facilitated the startup, they have been very important factors in developing my entrepreneurial skills. In particular, these have boosted my resilience, helping me to overcome the really tough situations that often stand in the way of an entrepreneur.

In the last four months I was able to consult mentors from GFAR and others[1]  on financial matters, on how to enter into collaborations, how to create projects and, on assessing pros and cons of possible partnerships and other issues. Moreover, our YPARD mentor, Michelle Kovacevic, organised a very insightful coaching series for six of us with Wayfinding Founder, Larissa Conte. Larissa’s coaching helped us connect with our deeper self and guided us on how make the best use of our energies and health to truly accomplish our goals. Each one of us had to reflect on questions such as what we want to do, where do we want to go and why. These reflections were shared by us in the group coaching series. Listening to the YAP colleagues was very encouraging.

I am now making a serious effort to combine the innovation, experience, knowledge, resourcefulness, connections and most importantly resilience, developed overtime so that this project can grow and we can provide solutions to problems the agricultural sector in India is struggling with. If we succeed, chances are we will to bring smiles to the  faces of the members of our incredible farming community.

I think a quote that all of YAPers can relate to is this: ‘Social entrepreneurs are not content just to give a fish or teach how to fish. They will not rest until they have revolutionized the fishing industry.’ (Bill Drayton). I am looking forward to accomplishing few very important milestones before I come up with my next blog in four months, as I hope these milestones will comprise opportunities to really revolutionize the Indian dairy industry.