Since the United Nations General Assembly declared 2013 as the “International Year of Quinoa”, this fascinating cereal has been gaining attractiveness as a real option to help achieve food security, not to mention hitting the shelves in trendy health-conscious supermarkets the world over. But why all the hype? If you are curious and want to know more about the potential of the super food, quinoa, then you should tune in (#quinoa4future) to the international conference entitled “Quinoa for Future Food and Nutrition Security in Marginal Environments”, taking place in Dubai, the United Arab Emirates, on December 6 – 8 2016. The event is organized by the International Center for Biosaline Agriculture (ICBA)—a strong a proponent of this alternative crop that can be sustainably grown in marginal environments—in conjunction with FAO and Zayed University. Partners in the Global Forum for Agricultural Research (GFAR), like ICBA and FAO, are focused on relieving food insecurity and enhancing agro-bio-diversity, and are therefore raising special awareness of crops like quinoa towards these aims.

If we take a closer look at this great South American cereal of the Andean region, it is clear that it can have a significant role in supporting food insecure areas.  Quinoa goes back to the time of the Mayans and Incas, and the name means “mother of cereals” which is due to its high nutritional value. Quinoa has the remarkable capacity to adapt to different climates, altitudes and soil, meaning this plant can grow both at sea-level and at a 4,000-meter altitude, making it truly unique. Moreover, the plant has not required improvements through hybridization. It already has both robustness and versatility with significant variability in seed sizes, colors and branching. 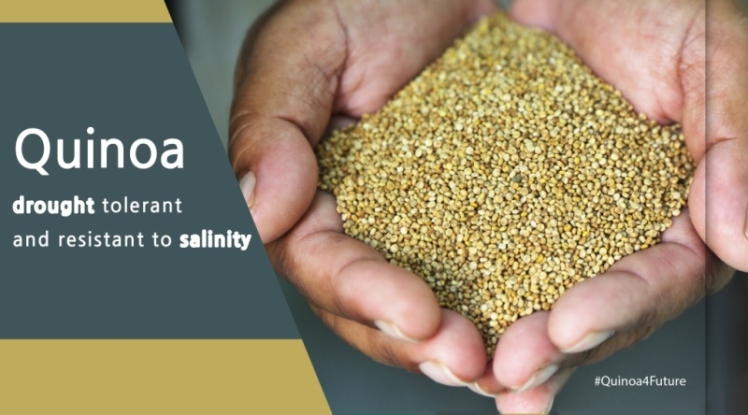 From the beginning of the 20th century, Europeans took great interest in the crop, particularly during World War 1. However, due to a general lack of experience in its cultivation, it was abandoned. Now, as food insecurity is affecting some 795 million people worldwide, and posing risks to health, life expectancy and even regional security, attention is turning back to the neglected super food

As highlighted by ICBA in its World Food Day blog, there has been considerable research work carried out since 2007 concerning the cultivation of quinoa to make it “a viable food option for people in the Middle East and North Africa (MENA) and other regions.” The blog explains that the MENA region has witnessed both “an especially high population growth and rate of urbanization, with about half of the region’s population living in cities.” This has resulted in increasing agricultural challenges due to “changing demographics as well as lack of arable land, limited rainfall, high temperatures, and soil salinity, all of which will be exacerbated by climate change.” A large number of people in the region will be affected over the coming decade.

So, as proposed by ICBA in its World Food blog, quinoa could offer one solution to these challenges. A study on quinoa by Giulio Lovato from the University of Padova reaffirms the crop’s nutritional characteristics: it is a very high source of protein “(from 12 to 18% depending on the variety), much higher than the average traditional cereals. Far more important, however, is the amino-acid composition of these proteins. It also has an average of 60 to 70% of carbohydrates in its composition. Quinoa is a good source of insoluble fiber, which plays an important role in the digestive system. The fat content in quinoa is between 4.1 and 8, 8%. Compared with the traditional grains, the fat content in quinoa is considerably higher than that of wheat and rice… It is very rich in many essential nutrients compared to other cereals, such as vitamins (B and E) and mineral concentrations particularly in regards to iron, magnesium, calcium and phosphorus.”

The organizers of the conference in Dubai are looking forward to offering a chance for scientists and technology implementers to meet with decision makers and various organizations. GFAR very much supports collective actions taking constructive steps to tackle food insecurity in the MENA region and other regions of the world. It is hoped that the event will serve as an example for other areas around the world to take advantage of their own unique varieties that may help confront similar challenges.

For more information on the International Conference “Quinoa for Future Food and Nutrition Security in Marginal Environments” please visit www.quinoaconference.com.

To follow the Conference on social media, use the hashtag #quinoa4future.

3 thoughts on “What is the future of Quinoa?”