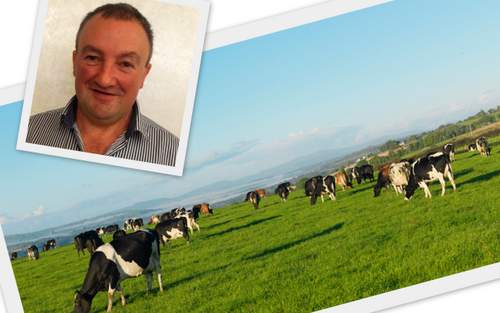 This is a story about a farmer. Not an ordinary one, a “happy” one.

I had a privilege to meet Michael Crowley, a farmer from Ireland, during the side session “Partnership for sustainable livestock development” at this week’s Committee on World Food Security (CFS).

He was sitting alongside panelists waiting for his turn to present. To me, he looked slightly nervous but excited at the same time. His presentation was in a video form. It was simple and short, but had a touching message: one that probably will make everyone who works in field of sustainable agriculture feel appreciated and happy.

With his wife, Michael Crowley owns a dairy farm of 50 cows. He is a member of the Carbery Green Dairy Farm, a project that promotes efficient management of resources and reducing the environmental impact of dairy farms in Ireland.

This post is part of the live coverage during the 43rd Session of the Committee on World Food Security (CFS), a project GFAR is running in collaboration with CFS. Anudari Enkhtur is one of five YPARD members who was fully sponsored by GFAR to participate in the GFAR social media bootcamp and to attend CFS as a social reporter from 17-21 October 2016.