The Association “Zamini Nav” (New Land), which is in Babadjan Gafurov district of Northern Tajikistan, manages 500 hectares of farmland. They sow cotton, cereals and vegetables. But field work in spring is particularly difficult: of the required irrigation water they receive only 20%.

“For more than a month we have been suffering from a lack of water, because the Kyrgyz farmers have closed the Khodja Bakirgan channel source”, said Ravshan Rakhimov, Tajik farmer and head of the Association. “Every month we need 1 million square meters of irrigation water. But now, we are obtaining only 20% of what we require. Imagine what kind of damage is done to our lands, and what we will harvest after such an acute shortage of water”, he added.

Mr. Rakhimov has a claim to fame in the region. His struggle for water distribution for the irrigation of crops has led to a ban on his passage between Tajikistan and Kyrgyzstan at the border outpost of Ovchi Kalacha – Kulundi. The border between Ovchi and Kulundi is considered the most densely trafficked, with hundreds of people from both sides crossing it every day.

Ovchi Kalacha is a rural council (jamoat) situated in Babadjan Gafurov district on the border which neighbors Kulundi village of the Batken region of the Kyrgyz Republic. The population is more than twenty-three thousand. This jamoat is considered agrarian and there are about 720 farms and households, ranging in size from 1.5 to 60 hectares of farmland. These farms are famous for the cultivation of strawberries, raspberries, tomatoes, cucumbers, onions and carrots.

Distribution of natural resources has always been a bone of contention between the neighboring villages. Ovchi Kalacha and Kulundi are no exception. 30 km of the Khodja Bakirgan river, which originates from a mountain ridge in Northern Tajikistan, flows through Kyrgyzstan. This source irrigates more than ten thousand hectares of farmland in the Sughd region.

“Four of our jamoat’s villages are neighboring side by side with the three villages of the rural council Kulundi of Kyrgyzstan”, says Goibnazar Khudoinazarov, secretary of the jamoat Ovchi Kalacha. “Of course we are living together in peace, but when it comes to living off the land, that’s where the arguments start”, he added.

Exactly a quarter century has passed since this problem began. During the Soviet period, problems with water distribution did not occur. Water was allotted by water meter: 70% to Tajikistan, 30% to Kyrgyzstan. With the collapse of the Soviet Union this system collapsed also.

“The system does not work. We do not get any droplets of water. The river is blocked from the other side. And we cannot do anything, our hands are tied”, says a local Tajik farmer.

Farmers say they cannot resolve the problem on their own. “We need the intervention of higher authorities. The approach to the problem should be thorough and complete. This is not an easy job. There are places where the source goes even inside the homes of Kulundi residents”, says local water distributor Osim Sarkor.

More than 80% of the farmland in Ovchi Kalacha suffers from a lack of water. Some farmers are proposing to the authorities to build reservoirs in order to stock up on water in the winter.

“It will not work. Firstly, our land like a sieve, the water quickly goes away”, says secretary of the jamoat Ovchi Kalacha, Mr. Goibnazar Khudoinazarov. “Secondly, it requires huge cost. For example, the construction of two large water reservoirs to provide Khujand city with drinking water from the Khodja Bakirgan river, took 10 years and many millions of dollars”, he added.

Meanwhile, the lack of water deals significant economic damage to local farmers. Members of the Association “Zamin Nav” pay twice as much to buy water from other sources. “Now we get the water from the channel HB-3 of the Babadjan Gafurov district for 35 cents. In reality, the water costs 20 cents. We have to pay dearly, because we’re not considered among the water users of this channel. In addition, farmers are using pumps to get water; the daily cost of electricity to power the pumps is $5.82”, said Ravshan.

The high cost of water, and a separate payment for electricity has affected the cost of products. For example, greens from Ovchi Kalacha cost 1 Somoni for 5 bunches, when farmers from Urunkhodzhaev offer 10 bunches for the same price.

Explaining the reasons for the lack of water, the head of the village administration of Kulundi Republic of Kyrgyzstan, Mr. Kubatbek Suleymanov, said that unfortunately they cannot open the channel, as Kyrgyz farmers also need water for irrigation in the spring. In recent years, the area of farmland in Leilek district has expanded tenfold. Also, due to population growth, the young families have moved to new sites.

The people of Kyrgyzstan are most famous for breeding. The interest in agriculture grew only a few years ago. There were several factors. Firstly, the state began to provide soft loans for long periods – just 7% per annum. The peasants began to get up to 60 hectares of land. Secondly, due to the economic crisis and the devaluation of the ruble in Russia, many labor migrants came back home and began farming. In addition, dozens of international organizations started to give grants for the introduction of new methods of farming. These helped allow installation of drip irrigation systems, and the building of greenhouses. Finally, in the fall of 2015, the locals cultivated two large areas of Bel-Olma and Karaganda Sai.

Tajik farmer Ravshan Rakhimov is still struggling for irrigation water. He recently met with colleagues in Bishkek in a meeting organized by international organizations. “Now the organization Helvetass Swiss Intercooperation has launched a new project to address the distribution of water resources in the border regions of Central Asia. I was invited to the first week-long seminar in Osh, the Kyrgyz Republic, which gathered activists and farmers. They also collect data and conduct research. I think if we move now, our land will soon be irrigated from the native source Khodja Bakirgan”, said Ravshan Rakhimov.

In April 2016, representatives of the two countries met to arrive at a solution for the spring field work. They approved the schedule for getting water from Khodja Bakirgan.

But people are not respecting it. And now the water from Khodja Bakirgan still appears to be a mirage for Tajik farmers. How much time the international organizations will need to solve the problem, no one knows. 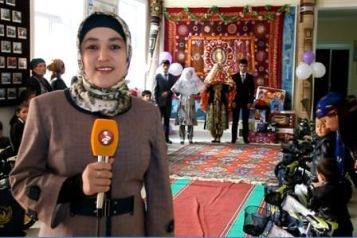