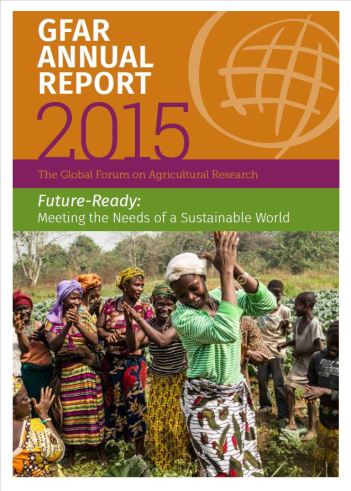 The launch of the Sustainable Development Goals in 2015 heralded a new development era, in which agricultural research for development will play a key role. The Partners in the Global Forum for Agricultural Research (GFAR)  responded accordingly, by taking stock of their progress and building on their strengths, in preparation for the challenges ahead.  These activities are outlined in the 2015 Annual Report which has as its theme “Future-Ready: Meeting the Needs of a Sustainable World”.

Based on GFAR’s six work streams, the document reports back on a number of key events and actions taken by partners from January to December 2015.  Highlights include:

GFAR Steering Committee Chair Juan Lucas Restrepo expressed his appreciation to all partners in GFAR for their commitment to both the future of agri-food research and innovation, and to GFAR. He also paid tribute to Hon. Prof. Ruth Oniang’o, as she retires from her role as GFAR Vice-Chair.

“The Forum is more than the sum of its parts and its strength is its open and inclusive nature that brings together many thousands of people, institutions and actions around the world. Our work is based on one simple principle: together we can do more to strengthen and transform agri-food research and innovation systems than we can alone.”