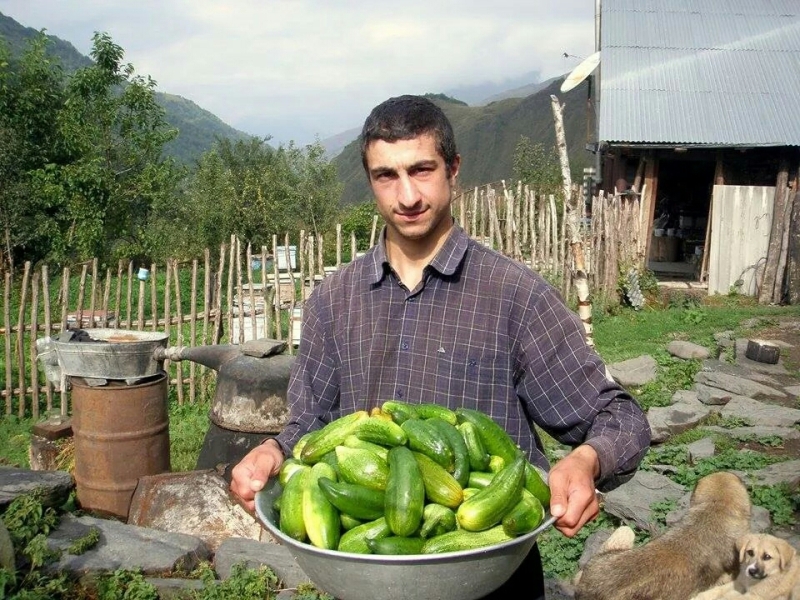 When you think of a farmer, what image comes to your mind? Many would say: a middle aged or even elderly man. His face weathered by the sun, and his hands worn out from heavy labor.

Well, I would have probably fallen into the trap of that classical image, as well… Until I met Nodar Tokhosashvili, a 24 year old farmer from Georgia.

Nodar is young, tall and handsome – like most fellows of his age. And he has a degree in Business Administration from the University in Tblisi.

Ukanapshavi, Nodar’s home village, is located in a mountainous area, 1,700 meters above sea level. The closest town and district center, Dusheti, is approximately 80 kilometers away.

The village is a quiet, remote and unique place. There are only seven households living there in the summer time. Like Nodar, they migrate from the valley to the mountains during warmer seasons and return back to town in winter time. There is no electricity and no mobile connection.

This area is difficult to access. Although Nodar says there is normally “a quite good bus connection” between the nearest village and the district center in summer, it is still a 12-kilometer walk from where he lives to the nearest bus stop.

When Nodar heard about his acceptance to the GFAR social media training in Bishkek under the auspices of the “#GCARD3 Regional Consultation for Central Asia and the Caucasus”, he had to get his passport from the village home.  The snow and ice made it impossible to get through the mountain passes by car.  So he walked almost 20 kilometers through 1.5-meter high snow to his home. And back..  To get his passport…

Nodar calls himself an organic farmer. Between May and October he stays and works in his village. Nodar has some bees of his own and produces about 500 kg of honey per season. He also borrows 20 cows from his neighbors and looks after them as a shepherd from spring to autumn. He does not own any cows himself. He re-pays his neighbors by sharing what he makes off the milk produce.

He processes the milk into butter and cottage cheese. However, these two products are perishable, so Nodar processes them into products that can be stored for a longer period of time, as a lot of his produce is sold during winter.

The butter is cooked and turned into clarified butter that Georgians call erbo. This butter can easily be kept up to 3-4 months.

The milk is processed into a country-style cheese called gudis qveli or mtis qveli. The cheese is kept fresh in brine, in plastic packages, and can last from six months to a year. Nodar produces about 1,500 kg of cheese per season.

The cottage cheese is also mixed with salt to make dambalkhacho, small balls dried for days over an oven and kept in kvevri, a special clay amphora for 2-3 months. This way, Dambalkhachos can be stored for 4-6 months in wintertime.

Nodar’s mother helps him to make all these products. So, currently it is an ‘enterprise’ of two people.

In October, Nodar and his mother moved back to Dusheti, the closest town. In order to sell his products in the winter season, Nodar opened a page in Facebook and called it “Mountain Produce” where he posts photos and descriptions of his organic produce. He keeps his prices modest and already has between 40 and 70 regular customers as far as Tbilisi. People contact Nodar by phone or via Facebook and tell him how much of each product they would like to purchase. Nodar forms a list and delivers the products the next day.

Nodar also kindly allows for advertisements of his village neighbors’ produce to be posted on his Facebook page. He provides their phone numbers, so potential customers can get in touch with the producers directly.

Growing up in the mountains, Nodar has always been close to farming and has always felt a special connection to animals. But the idea of starting a business actually came up three years ago, when Nodar returned from a 70-day au pair experience in Germany. There, he learned about the concept of organic farming and what possibilities it might bring.

At the present, farming is Nodar’s ‘lifestyle, hobby, and life philosophy’: “It makes me feel good. I love my work. When I bring organic produce to people, it gives me a good feeling”.

Nodar has ambitious plans. He wants to develop a system that will unite all farmers in his area and allow them to sell their produce more easily, possibly under one brand. With the new tools Nodar learned to use in our social media training at the #GCARD3 regional consultation, he has great plans too. His new blog will be launched soon, hopefully attracting more customers for his community’s produce.

According to Nodar, 30-40% of rural produce is wasted because people simply cannot reach the market. So, Nodar is planning to buy a small bus or a minivan that will allow him and other producers to deliver and sell their products in Tbilisi. He is also thinking of setting up some kind of regional hub, where farmers can bring their produce, do the packaging, and, maybe, storing.

Last year Nodar’s work was recognized by the Ministry of Agriculture in Georgia. The Governor of the Dusheti district informed the Ministry about Nodar’s farming endeavor. As a result, Nodar was given the “Young Farmer of the Year” award. This has become an additional motivatior for Nodar.

One of the statements that was repeated by various delegates at the “#GCARD3 Regional Consultation for Central Asia and the Caucasus” and unanimously agreed on, is that food security efforts should be made more inclusive for women, young farmers, and vulnerable groups. The work Nodar does within his village shows that those groups are not “beneficiaries”, but often vibrant and active communities.

So, the next time you think of a farmer, think of young, motivated, energetic and inspired young people who can and do make a change. People like Nodar.

Ed: Best of luck, Nodar, we are proud and honored to have you with us, in our #GCARD3 social reporters team in Bishkek!

This post is part of the live coverage during the #GCARD3 Regional Consultation for Central Asia and the Caucasus. This post is written by one of our social reporters, and represents the author’s views only.

8 thoughts on “Meet Nodar, not your ‘Typical’ Farmer”