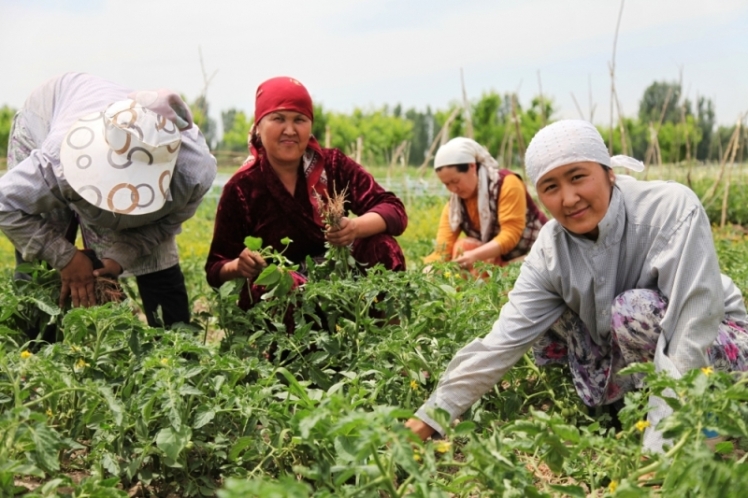 There are rare moments, at any conference, when a speaker makes a statement, and you feel everyone in the room holding their breath. It’s like you feel the tension in the room raising…

This was one of those moments… “Small is no longer beautiful” said Dr. Shenggen Fan from the International Food Policy and Research Institute (IFPRI), in his keynote speech at the #GCARD3 Regional Consultation for Central Asia and the Caucasus.

This was in reference to smallholder farmers and he highlighted that they should not be supported “at all costs.”He clarified that “There is a need for differentiation on when and how to support them.”

I have been told by people who are by far more knowledgeable about food security issues than me, that smallholder farming is an extremely controversial topic. Various stakeholders, including researchers, policy makers, and practitioners seem to have different opinions on the subject.

Apparently, Dr. Fan’s statement goes somewhat against the general thinking that favors heavy investments in smallholder farmers. So, in order to better understand Dr. Fan’s statement and what the whole controversy is about, I looked into a publication prepared by IFPRI called “From Subsistence to Profit: Transforming Smallholder Farms” (Shenggen Fan and al. 2013).

According to IFPRI’s report, smallholder farmers in developing countries play a cornerstone role in satisfying the demands for food from a growing and increasingly rich and urbanized population. It is estimated that small farms produce four fifths of the developing world’s food (FAO 2011). And while they supply a large share of global agricultural output, smallholder farmers happen to be among the poorest and most food insecure people in the world (IFPRI 2005).

Some studies demonstrate that small farms can be efficient thanks to more intensive use of inputs as well as lower costs associated with supervising family labor when compared to hired labor in larger farms. Other studies show that larger commercial farms are in a more advantageous position thanks to access to financing, technology, and logistics.

Another factor mentioned in the IFPRI report highlights the issue of profitability for smallholder farmers within the agricultural sector: subsistence farmers without profit potential, subsistence farmers with profit potential, and commercialized small holder farmers (mostly found in sub-Saharan African countries). It therefore becomes clear that smallholder farmers are not a homogeneous group: there are some farmers that have potential to engage in profitable commercial activities in the agricultural sector, and there are others that need support to exit agriculture and pursue non-farm employment options especially as the economy evolves from an agriculture-based one to a transformed economy (like in Eastern Europe and Latin America where agriculture has now become a small source of economic growth).

Furthermore, there is an endless list of challenges that prevent smallholder farmers from being successful.  The list includes but is not limited to the effects of climate change, price shocks, limited financing options, inadequate access to healthy and nutritious food, insecure property rights, and lack of access to education. Extreme natural events, such as droughts, wildfires, heatwaves, and floods, also pose threats to the farmers.

IFPRI recognizes the important role of smallholder farmers but says that the issue has moved beyond the small versus large farms discussion. The optimal farm size is a dynamic concept that changes as a country’s overall economy grows and as the non-agricultural sectors develop. Bearing this in mind, interventions must be tailored to the different types of smallholder farms and to the specific context the farms operate in.

As the transition occurs, it is argued that many smallholder farmers will not be able to survive or transform themselves into profitable agribusinesses. These farmers will require humanitarian assistance in the short run and viable exit strategies in the long run. On the other hand, there are many smallholder farmers that have potential to become profitable businesses with the support of targeted social-protection policies. In Asia, smallholder farmers’ participation in the Green Revolution was enabled by policies, which included equitable land distribution, secure ownership and tenancy rights, scale-neutral technologies, temporary input subsidies, and large investments in infrastructure, such as roads and irrigation.

Another way of increasing smallholder farmers’ resistance to shocks as well as improving their productivity and livelihoods is to link them to agri-food value chains. However, many smallholders in transforming and transformed economies are unable to meet increasingly specific and strict quality standards, the high volume of requirements, and logistics specifications of value chains. This results in companies signing contracts with larger farmers and giving preference to those with certain non-land assets, such as irrigation or access to paved roads.

More importantly, moving from subsistence farming to more commercially-oriented agriculture requires increased capital and investment that focuses on smallholder farmers and their specific constraints and needs. Taking into consideration existing and future agricultural demand, capital flows to the agricultural sector as a whole remain largely insufficient. Loans from commercial banks to agriculture and the rural poor are limited in many developing countries and microfinance has not always proved effective.

Whilst looking into IFPRI’s position on smallholder farming, I could not forgo a discussion from a beautifully written article entitled “Food and the Transformation of Africa: Getting Smallholders Connected” by the former Secretary General of the United Nations Kofi Annan and Sam Dryden (Foreign Affairs, Nov/Dec 2015).  In this article, the following statement is made: “Neither of us is sentimental about small farms, but we recognize the need to be practical. More than 80 percent of African agricultural production comes from smallholders. Any rational food system for Africa must put its smallholders first.” Although the article is fully dedicated to Africa, many of its points could apply to countries in Asia, especially India.

For several years, many African governments tried to bypass the existing agricultural sector and invested in large-scale commercial farms. This—in theory—should have been more efficient. However, allocation of vast lands to foreign investors, reserving water for industrial level operations, and focusing research and development on a few cash crops has not proved useful to the majority of farmers. It also has not delivered enough food to feed Africa’s rapidly growing urban areas. As a result, food imports are going through the roof whereas city residents spend more on food than they should.

The article asks that modern agriculture move away from discussions on yields or calories, and rather focus on the changing societies. And so, it is proposed that the five characteristics of modern agriculture should be: valuing the smallholder farmer, empowering women, focusing on the quality, as well as the quantity of food, creating a thriving rural economy, and protecting the environment.

Specifically in terms of smallholder farmers, the article highlights that the smallholder farmers’ success in Africa (and this could work in other parts of the world) will mainly depend on their having appropriate seeds and fertilizers, receiving education and training, and having easy access to markets and larger economic networks along with using farmer extension programs that have proven to be supportive schemes.

And certainly, an appropriate infrastructure must be in place after harvesting and this includes storage, transport, processing, and marketing. It is also important to note here that each one of the aforementioned post-harvest components can be an opportunity for entrepreneurship. This showcases that possible to say that a healthy food system can help create wealth for the rural and it can also provide sustainable non-farming employment opportunities.

So, to answer the question ‘is “small” still “beautiful”?’ My answer would still be yes although my thinking is definitely shifting.

This post is part of the live coverage during the #GCARD3 Regional Consultation for Central Asia and the Caucasus. This post is written by one of our social reporters, and represents the author’s views only.