I am founder and vice president of Youth For Agri Welfare, a youth organization that promotes agriculture among youths and farmers. I am also member of YPARD Nepal. Besides that I am a farmer, blogger, photographer, traveler, reader.

On 30th Dec 2015, I carried out my research about the employment of youths at Beulibas VDC ward: – 9, a rural village of western Nepal. The findings were, out of 38 youths from 23 households, 1 is in the United States, 4 are in the Europe, 30 are in the Gulf nations and 3 are self employed in the village itself.

My motive was to estimate the possibilities of initiating a youth led agricultural enterprise, hopefully to encourage other young people who are slogging their important times in gulf nation and the youths who are contributing their valuable times in the Agri-entrepreneurship at local level.

The project is realistic and sustainable, as we will be producing vegetables to fulfill the demand of local shops. If we could get support as a motivation, we could encourage many youth of that village, the income they generate will help them increase the economic status, while no sons and daughters have to be separated from their family in search of a job and prosperous life that will ultimately increase the social status of whole village. As in the present context, all the youth are being driven to different places seeking job opportunities while village are left over for dependent population.

In Nepal, when a youth turns 18, he applies for passport to work in a foreign country. Malaysia is the number one destination, closely followed by Qatar, Saudi Arabia, UAE and Kuwait. Now he’s ready to fly abroad, without foreknowledge of his destination and workplace. This is the reality of youths living in rural Nepal, whose parents can’t provide them with good education and work opportunities. The family and social influence, suggestions from peers and the pressure of being the breadwinner of house are reasons he flies to unknown land.

In 2014, more than 520,000 labour permits were issued for Nepalese citizens planning to work abroad. Further, there were over 1 million permits issued only for India. Time and again, we have been reading dreadful news from different countries; our citizens being exploited physically and emotionally. And thus, every year a son, a father, a daughter and the same breadwinner who goes to a foreign land with aspiring dreams, return in coffins. The same ongoing trend has made the nation suffer a huge loss because both its intellects and the labors are ameliorated by developed nation. They have grievances of Nepal being underdeveloped nation. They want Nepal to be same like developed countries staying in foreign land. They want change but are not ready to contribute in the grass root level.

Surprisingly, labour migration has developed in such a way that the nation has made a paradigm shift as a remittance economy from the agricultural based economy. Also, what disappointed me the most after interviewing local marketers was my findings, that majority of the Agri-products were imported, despite all promised potential.

On the other hand, I decided to chip in my contribution and invited all the youths, including their parents who were currently at village for a meeting. The agenda of the meeting was how we can start to contribute for agricultural enhancement from our community level. Luckily, I was joined by 5 youths who were in the village for their vacation and they were joined my some more. 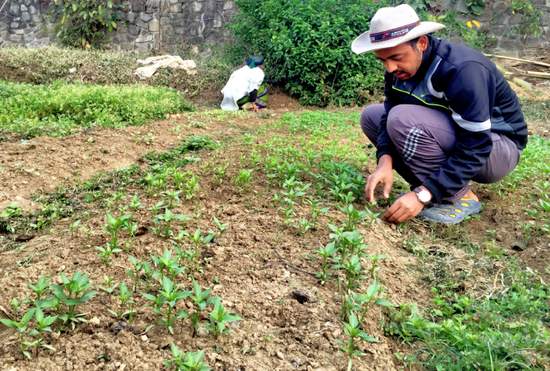 I want my country to be developed and to create a platform for my fellow citizens through farming. It is one of the only professions that is the best for the country’s development, if we can invest in a farm, first it will help in self-sustainability. It not only empowers the individual but also helps sustain the village’s economy by reducing the imports of Agri-based products.

Adding up, ones the production is in the large scale it further provides raw material to small-scale industries thus increases the economic status of the village and also with in increment of number of youth at village, it will also be socially uplifted, as youths can grasp newer technologies quicker and can invest in their village.

We have established a farm name YUVA KIRSI BAGAICHA that means Youth Agriculture Garden. We have collected $50 (5000 Nepalese rupees) from each youth and decided to cultivate seasonal crops. We have already prepared seedlings and fixed our land to lease for raising those crops and also have started mushroom farming.

The success of our program is to be self reliant from our own product after the funding of our project is over. For this, the revenue collected from the vegetables we produce can be of great value. Also the learning potential and enthusiasm which some of our villagers are showing right now is a part of our success.

From this project, another success would be to multiply this enthusiasm and encourage near by villagers to be self-reliant and export vegetable and goods to make optimum profit in a rational way.

For the continuation of our project after our fund is over, the goods we produce would be sufficient. As we have estimated the cost of production and the cost which the villages are paying right now for vegetables coming from outside, our cost seems way cheaper for consumers. Reducing the chain of syndicates, it would ultimately add the value to the farm’s sustainability.

This post is published as proposal #56 of “YAP” – our “Youth Agripreneur Project”.