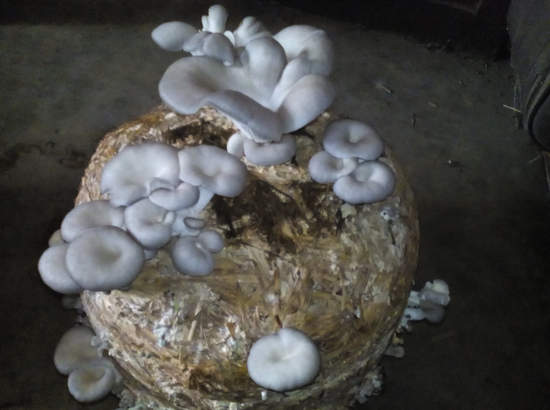 Spawn production for Mushroom farming to develop as mushroom industry

I am Sunil Shrestha, 24 years old currently studying agriculture and about to graduate from Institute of agriculture and Animal Sciences. I have been involved in the agriculture about five years back before my undergraduate level education as commercial farming through own farm.

As entrepreneur I would like to involve in the spawn production for the successful mushroom cultivation and to shape it as mushroom industry in my country Nepal. Mushrooms are fungal form of life. They are rich in protein compared with other vegetables. Its production is one of the most promising and highly desirable activities in developing countries to reduce protein malnutrition. As it is easy and reliable due to easily available substrate for the mushroom cultivation, it is getting popularity among resource poor farmers as well and has becoming a source of income as well.

Mushroom cultivation has two main phases, spawn production and fruiting body production. The mushroom seed is generally referred to as spawn. It is the propagating material used by the mushroom growers for planting the beds. Spawn is the vegetative mycelium grown on a convenient medium like wheat, pearl millet, sorghum, etc for raising mushroom crop. It essentially involves preparation of pure culture of mushroom from tissues/ spores that is generally maintained on any agar medium, followed by culturing on sterilized grains and further multiplied on grains. The spawn thus comprises of mycelium of the mushroom and a supporting medium which provides nutrition to the fungus during its growth. The quality of the spawn is basic for the successful mushroom cultivation. Production and productivity success largely depends on the quality and purity of the spawn.

There are three steps involved in spawn production: Raising pure culture, Preparation of mother spawn and Multiplication of spawn. Preparation of agar media is basic for mushroom cultures. There are several types of agar media such as potatoes, malt extract and corn meal. Potato dextrose agar and malt extract agar are available in market and could be prepared according to instruction given by the manufacturer.

Media preparation of potato dextrose sugar
Wash and slice potatoes into small pieces and place it in the boiling water @ 200g per 1 liter of water in the flask and boil for 15 minutes. Filter the potato broth using a piece of muslin cloth. Add 20g of Dextrose and 20g of agar and adjust the volume to one liter by adding water. Sterilize the agar mixture and petri dishes or test tubes in the autoclave and pour the agar carefully into petri dish (20ml) and test tubes (10ml). Keep the test tubes in a slant position so that the agar slants are solidified. Next day the agar slants is use for pure culture or store in refrigerator.

Raising pure culture through tissue culture technique
For tissue culture, the basidiocarp from fresh fruit body after alcohol sterilization is cut longitudinally into 2 halves and bits from collar region are transferred to pre sterilized PDA or MEA culture medium. The Petri-plates are incubated at 250C ± 10C in incubator for one week. Mycelium from growing edges is carefully transferred to MEA/PDA slants and again incubated for 2-3 weeks to obtain pure cultures.

Grains spawn preparation mainly of the cereals
Mushroom spawn can be prepared on any kind of cereal grains like wheat, jowar, bajra or rye and agricultural waste like corn cobs, wooden sticks, rice straw, saw dust and used tea leaves, etc. Spawn substrate i.e. cereal grains should be free from diseases and cereal grains should not be broken, old, and insect damaged. Washed grains are then soaked in sufficient water for 20-30 minutes and boiled in a container for 20-25 minutes. Normally for soaking and boiling 20 kg of wheat grain, 35 liters of water is required. Excess water from the boiled grains is removed by spreading on sieve made of fine wire mesh or muslin cloth. The grains are left as such for few hours on the seive so that the water on surface is evaporated. Now the grains are mixed with Gypsum (Calcium sulphate) and chalk powder (Calcium carbonate) so that the pH of the grains is around 7 to 7.8 and they do not form clumps. First Gypsum and chalk powder are separately mixed and then they are thoroughly mixed with the grains. This mixing is done on a smooth surface after wearing gloves

Preparation of the mother spawns from the pure culture
About 350 g prepared substrate is filled in bottles or polythene up to 2/3 volume and plugged with non-absorbent cotton. The plugs are covered with aluminum foil. These bottles are then autoclaved at 22 lb p.s.i. pressure at 1260C for 1.5 to 2 hr. These autoclaved bottles are left in the room for 24 hours for cooling. A piece of mycelium (pure culture) grown in Petri plates is aseptically transferred to these bottles and inoculated bottles are incubated at 250C. Inoculated bottles are gently shaken on 5th and 10th day. This spawn prepared using pure culture mycelium on agar medium in Petri plates as inoculant is referred as mother spawn. Fully colonized mother spawn bottles can be used for inoculating commercial spawn bags after two to three weeks.

Multiplication of mother spawns. (Commercial Spawn Preparation)
Commercial spawn is prepared in polypropylene bags (heat resistant). Polypropylene bags should have double sealing at the bottom and after filling the grains they are plugged with the help of non-absorbent cotton. The bags are then sterilized at 22 lb p.s.i. pressure for 1.5 to 2 hours. Autoclaved bags are shaken well before inoculation so that the water droplets accumulated inside the bags is being absorbed by the grains. 10-15g of grains from master spawn bottle is inoculated per bottle under aseptic condition or one bottle of master spawn is sufficient for inoculating 25 to 30 commercial spawn bags. Inoculated bags are again shaken so that the inoculum is well mixed with other grains. Then the bags are kept in incubation room for mycelium spread. During incubation the bags are regularly examined for mould infestation. Contaminated bags are immediately removed before discarding the bags to avoid build-up of contamination in the vicinity. Normally it takes 15-20 days for complete spread of mycelium on the grains. Fully colonized bags is kept in cold room (+40C) for future use

At last after the multiplication of the mother spawns it becomes ready for the distribution to the farmers for the use. Before the distribution of spawn, 1-2 days training on the mushroom cultivation would be given for the successful production of the mushroom fruiting body, which has higher nutritional, medicinal values as well as have economic value. This will serve as a means of generation of employment particularly for the rural women and youth in order to raise their social status. The budget provide will be utilized for the purchasing of the instruments required for the spawn production such as Autoclave, Incubator Petri dishes, etc and also for the farmers training.

Through this project the poor farmers would be benefited for the improvement of their economic condition and also helps the reduction of the malnutrition through successful mushroom cultivation. Also become helpful for the commercial growing of the mushroom with the easy availability of the spawn which is the main basis for the mushroom production and development as mushroom industry.

This post is published as proposal #41 of “YAP” – our “Youth Agripreneur Project”.