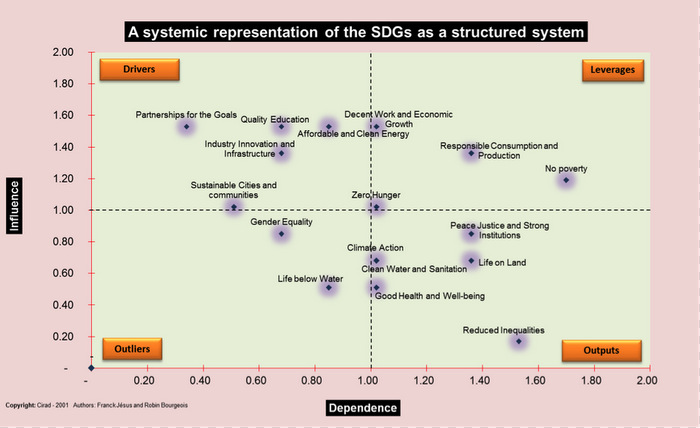 The new Sustainable Development Agenda, comprising 17 Sustainable Development Goals (SDGs) and 169 targets, has been heralded as “a universal, integrated and transformative vision for a better world ”. Commitments have been made and expectations are high. Robin Bourgeois (Senior Foresight Advisor, GFAR Secretariat) proposes taking a systemic approach to implementing the goals, paying close attention to the interconnections between them.

The negotiations are over and a new era of international development cooperation has begun; but the real work will be in turning the 17 “boxes” that are the SDGs into practical, effective action at scale, achieving their synergies and avoiding damaging trade-offs. There is agreement that the boxes are connected and that these connections have to be taken into account. Some attempts have been made to look at the SDGs as a network of targets.

Clearly, it’s time to think outside the boxes; to take a structured approach to help us understand the SDGs as a system of interconnected dimensions and how they influence each other, and to use that understanding to nurture concrete actions.

One approach is to map the relationships between the goals on a matrix, placing the SDGs in different categories according to the role they play in that system: as drivers, leverages, outputs, or outliers.

In the illustration above, the position of each goal is determined by the number of other goals it directly influences and the number of other goals that directly influence it. (The matrix is not displayed here but can be shared upon request). It shows for example that “Reduced Inequalities” is an output of the interaction of many other SDGs. Thus, achieving lasting impact, in terms of reduced inequalities, will require significant progress in many other SDGs as a precondition.

“Partnerships for the Goals” is placed very high as a driving force for the success of the SDGs, which is logical. But interestingly too, the figure shows that achieving “Quality Education”, providing “Affordable Energy”, promoting “Decent work and Economic Growth” are key forces driving the evolution of the SDG system. “Life below Water” and “Gender Equality” are more disconnected so that specific direct attention would be needed to achieve these goals as they are less prone to influences from other SDGs.

Now imagine that instead of being produced by a single individual, these results were produced by a group of around 20 people, well versed in the different development dimensions, from all parts of the society and the world? Imagine them together building a collective wisdom on the connections between the SDGs. Imagine that this was done at various scales and, in particular, at national levels where these connections would be articulated differently according to local conditions.

Suddenly it would be possible to identify priorities based not on the willingness of one or another organisation to pick its own SDG as it fits with its existing agenda, but on the interrelationship – the cause and effect – between the SDGs. With this knowledge, the international community could come together to engage in collective action to achieve SDGs (as defined at the recent GFAR Constituent Assembly).

As President Obama said, “Today, we set aside scepticism and lift up the hope that is available to us through collective action.” Time to be system-smart together?