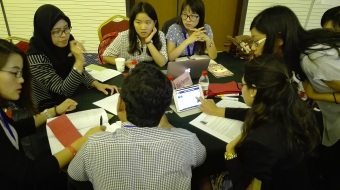 Beijing was a hotspot for young professionals in agriculture, last week. The Chinese Academy of Agricultural Sciences (CAAS) hosted the “APEC Food Security Training and Workshop” on September 7-9, 2015. This event, funded by the Ministry of Finance of the People’s Republic of China aimed at training over 30 young researchers from Asia Pacific Economic Conference countries’ to build their capacity in tackling food security issues. As a representative of the Global Forum, I was invited to attend this event and offered the participants to dip into plausible futures for young professionals working in agricultural research and innovation systems.

A back-to-back event (Sept 10-12), still supported by CAAS and funded by the YPARD Global Coordination Unit, was the first conference of the Asia and Pacific Young Professionals in Agriculture for Development network (YPARD Asia). This meeting included a side-event where I was given the opportunity to engage again with more than 30 young professionals in foresight. This time we reflected together on the futures and together built contrasted plausible scenarios for YPARD Asia.

Besides this foresight event, the main purpose of the meeting was for YPARD Asia country representatives to establish their strategic development plan 2016-2018 and related activities.  As a member of the YPARD Advisory Committee I was given the privilege to assist as an observer to various working sessions. A privilege? Yes, definitively a privilege!

A privilege to witness young professionals working with rigor, commitment and joyfulness.

Rigor was everywhere: in the thorough revision of their draft plan, crafting sentences, word by word; in the attention given to ensure that ideas and proposals would be feasible and sensible; in ensuring consistency throughout the whole process, going back and forth through the different sections; in keeping their framework consistent with the global orientations of YPARD but tailoring them to the specificities of Asia and the Pacific.

Commitment is probably an underestimation. Not just because they relentlessly worked from dawn to dusk, with rare and short breaks, but also because all ideas, all proposals systematically reverted to supporting the cause of agriculture in development and ensuring that the youth will be given all opportunities, possibilities and capacities to play a major role and be recognised for it. I was impressed, too, when I learned that, in the Philippines, the young professionals who established YPARD Philippines put money from their own pockets to ensure YPARD Philippines could go through the process of getting a legal status to make it an independent entity, facilitating its operation and its fund raising activities in the specific context of the country. 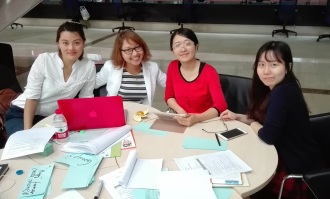 Joyfulness it was, too. Usually, writing strategic development plans does not lead to bursts of laughter, but it did, and more than once. It was joyfulness shared among all, independently from their country of origin, their gender, their background. Being from Bangladesh, China, India, Iran, Kyrgyzstan, Nepal, Pakistan, the Philippines or Uzbekistan does not matter when you are a young professional and you have a common sense of belonging. At a stage, a discussion started whether building a “community of practice” was something to be included in the strategic development plan. I could not resist sharing with them my feeling that indeed they were already making it happen!

I had just one regret while listening to them and observing them: that I had been a young professional at a time where young professionals in agriculture were not yet internationally or even regionally organized in such a dynamic way.

But there is no sense to end this blog with a sad note. Young professionals are working hard to give agriculture a bright future in development. They are just becoming the future they want to see!

6 thoughts on “Becoming the change they want to see: Asia and Pacific Youth in Agriculture”